Young Activists Fighting for a Better Memphis For All Of Us

These past few months have been a wild ride—as if I even have to say that. Our favorite bars, restaurants, and hangouts have been closed, opened, closed again, redone, rethought, and reorganized, all in the midst of monumental civil unrest, economic hardship, and political upheaval. But throughout all of this, young Black and queer activists have made their voices heard across the country and right here in Memphis. Perhaps the most unique thing about this wave of activism is the intersectionality of a wide range of issues.

First, there is a public health crisis that, to many young folks, highlights the need for universal healthcare, and identifies the harmful inequities in the current system. On top of that, police brutality and racial violence have galvanized people across the country to undermine white supremacy and to root out the systemic causes of it.

Interwoven within these major national crises are subsequent efforts to eradicate sexual abuse and harassment, and grassroots efforts to prevent marginalized communities from being overlooked in response pandemic protocols such as the city’s mask mandate.

In each of these movements, there are young local activists who are here to fight, and here to stay. I spoke with a few of these leaders to understand where they are coming from, what they are doing now, and how they plan to sustain their activism into the future as they fight for a better Memphis for all of us.

If you haven’t heard the name Jordan Dodson yet, you haven’t been paying close attention to the local protests. Born and raised in Memphis, and now a student at the University of Memphis, Dodson has been using her voice to speak out on a wide range of issues she feels strongly about.

On June 5th, in response to the killings of Ahmaud Arberry, Breonna Taylor, George Floyd, and Tony McDade, and even remembering the names of Trayvon Martin and Sandra Bland, Dodson led a protest in the Cooper Young neighborhood. She marched in that neighborhood to highlight her demand to “give money back to marginalized communities such as Orange Mound.” Nearly 200 protestors joined her as they demanded for the reallocation of city funds in order to invest in Memphis’s most vibrant, but often neglected communities.

As she became a leader in the local fight for justice for all Memphians, Dodson connected with two other emerging activists, Chase Baltz and Logan Totty, to create PPE4BIPOC, a local donation drive for Black, Indigenous, and People of Color + the homeless community in Memphis that hosts pop up shops to deliver masks, gloves, and other sanitary products.

“I’ve done my best to explore as many ways to protest as possible,” Totty said, “Some of those ways include having hard conversations with your racist family members, virtually protesting, amplifying black voices, donating to bail funds and other nonprofits, calling officials and demanding justice for the black lives they seem to have forgotten, and using my privilege to provide resources to those that don’t have the tools to protect themselves from this virus.”

Baltz, who was dismissed from his service industry job in the early days of the pandemic after organizing his workplace to demand better protections from the virus, was electrified by Dodson’s activism and leadership, and teamed up with her and Totty to begin distributing personal protective equipment (PPE) to marginalized communities.

“It just goes to show how community reform is the future,” Jordan Dodson said.

Thus far, Totty, Baltz, and Dodson have raised over $5K to supply PPE in communities like Orange Mound, Frayser, and the Heights, and they will continue to host PPE pop ups for as long as they have supplies to give away. But these popup tables are not only about making sure people have the supplies and education they need, but also to send a message.

“The message we want to send is that access to healthcare is a human right, especially during a pandemic,” Dodson explained, “Masks have become a form of capitalist oppression. If we say Black Lives Matter, we have to take care of BIPOC people in this community.”

“People are tired and people are ready for real freedom and equality,” says Kady Brown, the founder of the Memphis Women’s Rights Advocacy Group, a new group that works to connect survivors of sexual abuse with resources and advocates for better policy to protect survivors and prosecute abusers. The organization is currently focusing on ways to use social media to connect survivors with information that can help them take action, and their work can be seen and shared on their official Instagram, @MemphisWomensAdvocacyGroup.

Brown’s activism has intersected with Dodson’s through a panel on sex education they hosted in late June that helped to further the conversation around reallocating government funds to bolster sex education and sexual health initiatives throughout Memphis.

Working to make sure that all people have an entry point to the conversations these activists are carrying out, writers like Aura Shakhar Ware are contributing to the movement in their own way. A Memphis native currently studying at Albion College, Ware is an up and coming journalist who has honed her skills writing on topics ranging from the Black Student Alliance to how coronavirus impacts students for the Albion Pleiad.

“Journalism is needed to glorify the younger and up and coming activists because they have a lot to say, and we have new perspectives,” Ware said, “We want to uphold the values and thoughts of the older generation, but also incorporate our perspective.”

In addition to the work she’s done for her student-led newspaper, Ware maintains a blog where she publishes on topics like identity, racism, and patriotism. 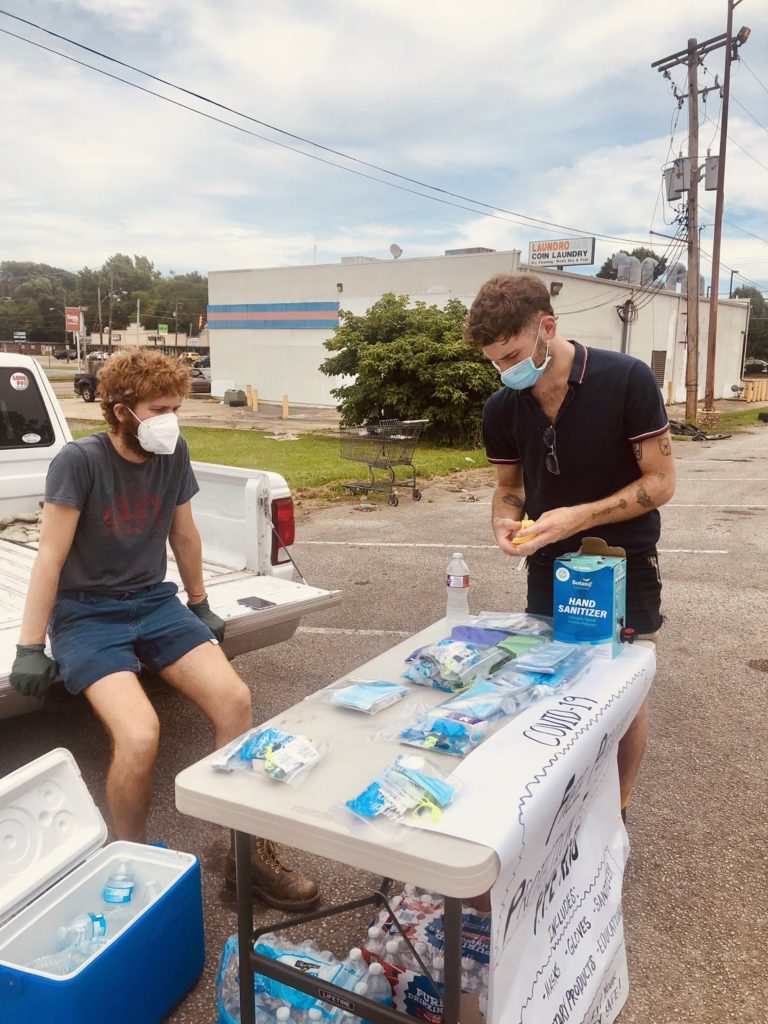 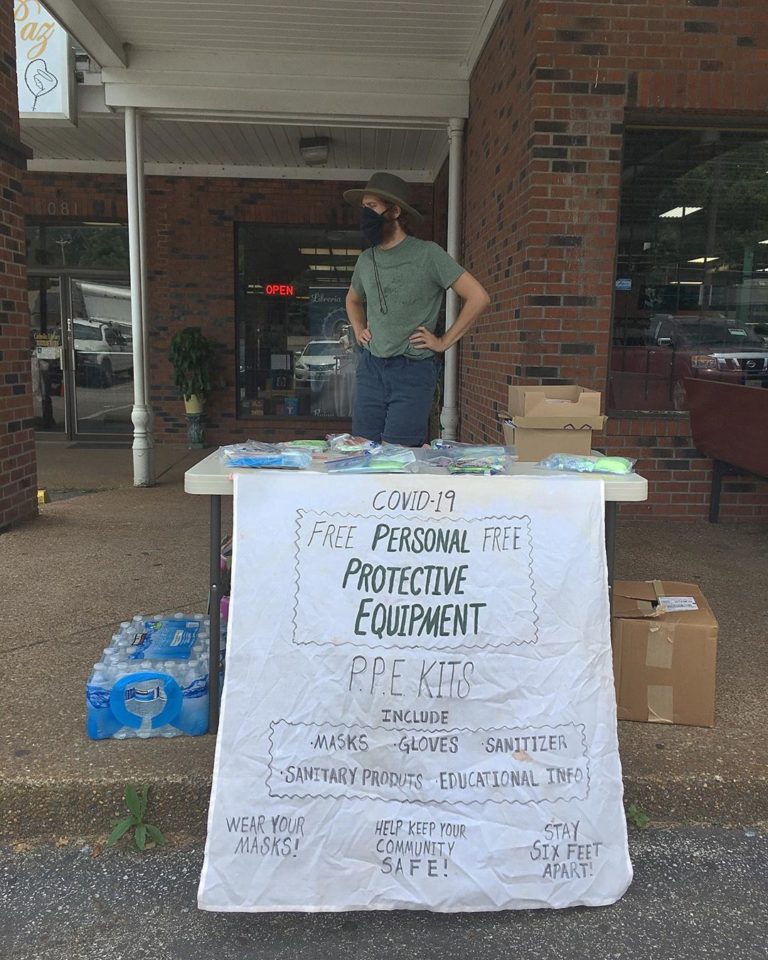 “My whole thing is connecting the dots for people,” said Ware. “It’s kind of hard for us to think that access to healthcare and things that are being mentioned in the BLM movement are not intersecting because it’s not very obvious.”

“It all intersects,” said Dodson, echoing Ware, and it just goes to show how community reform is the future.”

Even beyond the intersections of these political and social issues, every activist I talked to also makes art. “I want to continue to make art, because creation is revolutionary,” said Baltz of his painting.

“It helps keep me grounded and make sure my energy is right,” said Ware of her poetry. Whether it’s through creating music, making illustrations, painting, or writing, young activists in Memphis are dedicated to making a future that is not only just and equitable, but beautiful as well.

Keep up with the work that Jordan, Logan, and Chase are doing by following PPE4BIPOC.

Learn more about Memphis Women’s Rights Advocacy Group, and tune in to their Free Legal Consultation with Memphis Area Legal Services on June 22.