In 2019, Stax Music Academy garnered national attention when Levi’s and Justin Timberlake generously donated a brand new, state-of-the-art songwriting lab. It happened again in December when Ellen Degeneres invited students from the music academy to be guest performers on her show, The Greatest Night of Giveaways, and gave one Stax Music Academy student a cash gift for his college fund, along with a $250,000 donation to Stax Music Academy.

In Memphis, some of us might take the Stax legacy for granted. But for those living and breathing it every day, it’s hard to forget just how special it really is. Paul McKinney, Instrumental Music Director and Jazz Studies Coordinator at Stax Music Academy, explains what the music academy, and the Stax legacy at large, means to the city of Memphis.

“The community loves what this is,” said McKinney. “Isaac Hayes would park his Cadillac, running, on McLemore––and no one would touch it.”

“There’s a sanctity, there’s a respect,” he says, describing the section of McLemore Avenue between Neptune Street and College Street, that’s home to the Stax Museum, Stax Music Academy, and the Soulsville Charter School.

“You know, you could walk around here and never see any graffiti. It’s Holy Ground. Magical things happen to you,” McKinney said. 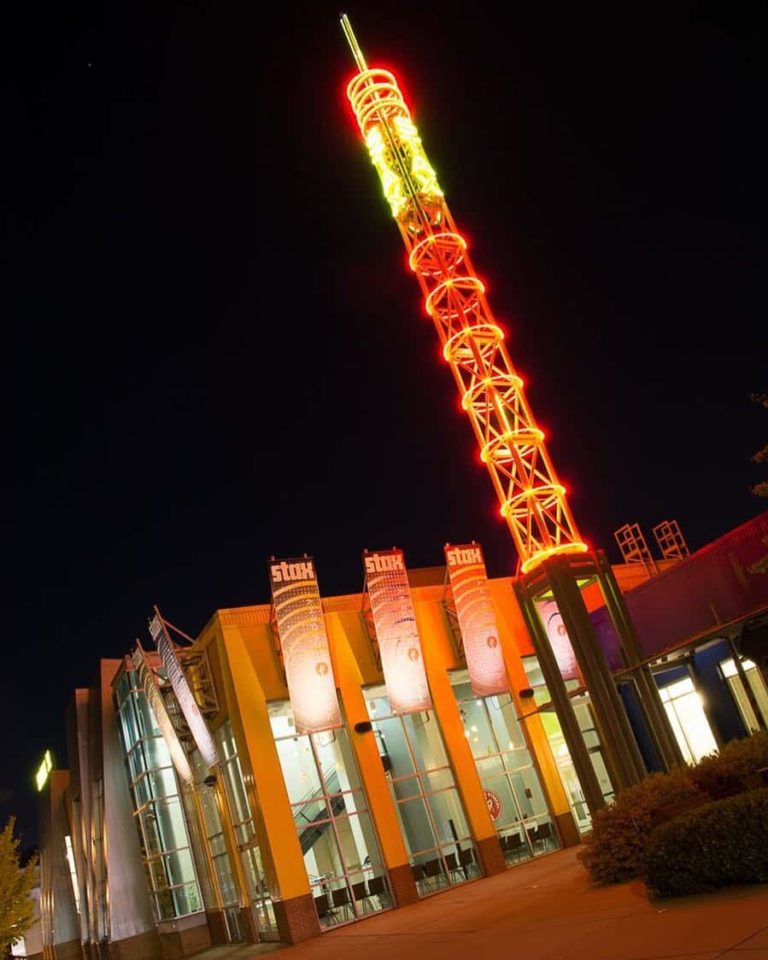 If you’re from Memphis, you’re surely familiar with hits from artists like Otis Redding, Rufus & Carla Thomas, Booker T. & the M.G.’s, Sam & Dave, and so many others. But few of us commit to studying the Memphis Masters with the same passion, dedication, and enthusiasm as the students at Stax Music Academy, which has graduated more than 4,000 students since its founding. Since 2008, every high school senior has been accepted to a college or university, many on full scholarships. Stax Music Academy alumni can be heard around the world, teaching, performing, recording, and more at the highest levels of the music industry. Their recent performance on Ellen’s Greatest Night of Giveaways is just one of many high-profile performances in the music academy’s 20-year history.

But beyond becoming professional musicians, music education early on can lead to a multitude of career paths later in life. For example, a young student named David––who studies guitar and electric bass, and was one of the students who met Justin Timberlake last year––plans to study musical psychology after he graduates high school.

“Musical psychologists work with therapists, or music therapists, to see what patterns you can find in the behavior of people through music, what music does to people’s stimuli in their minds, and what it actually can do to, you know, make people feel better and have an impact in people’s lives,” David said.

“Music has been an escape for me all my life,” David explained. “Whenever I have not been able to talk to somebody about something, I can always write a song about it—you know, play through it. And this has always been an added way for me to have a way out of reality.”

Helping people is very much part of the culture at Stax Music Academy. David further affirmed that as he went on to explain the family dynamic felt within the academy.

“We’re a family, we don’t take anything lightly. If anybody is going through something, we like to feel like, you know, ‘if you need to talk to us upperclassmen, [you] can talk to us,’ or if they just have a question about anything, whether it be school-related, musically-related, obviously, or, something in life that they’re dealing with, and they want to have an outlet or someone that they can talk to who’s a little closer in age, they can reach out to us,” David said.

Stax Music Academy is about more than teaching music; it’s about teaching leadership. Rita, a Stax alto saxophonist, mentions that learning to become a leader is the biggest takeaway from her time at Stax Music Academy.

“I learn from those around me, and from my mentors, how to deal with certain situations, and how to help others who are also in the academy,” Rita says.

“Being a leader at Stax is about more than helping someone with music, or helping someone learn a song. It can also apply to any situation in life. The different techniques of [being a leader] help us overall, and help you become a better person, understand people more, and be more open,” she says.

Funding for arts education is at risk, both in Memphis and around the country. As a precaution against the spread of coronavirus, Stax Music Academy announced on March 12 that they would be closing through March 30 and cancelling all events, including the Trombone Shorty performance at Crosstown Arts that was originally scheduled for March 21.

If you’ve ever thought that investing in arts education was important, it’s, perhaps, never been as important as it is now that these students’ educational, musical, and personal development has been unfairly halted due to the spread of the COVID-19 pandemic. It may feel like we’re living in a different world these days, but the mission behind Stax Music Academy remains the same: to inspire young people and enhance their academic, cognitive, performance, and leadership skills by utilizing music with an intense focus on the rich legacy and tradition of Stax Records. 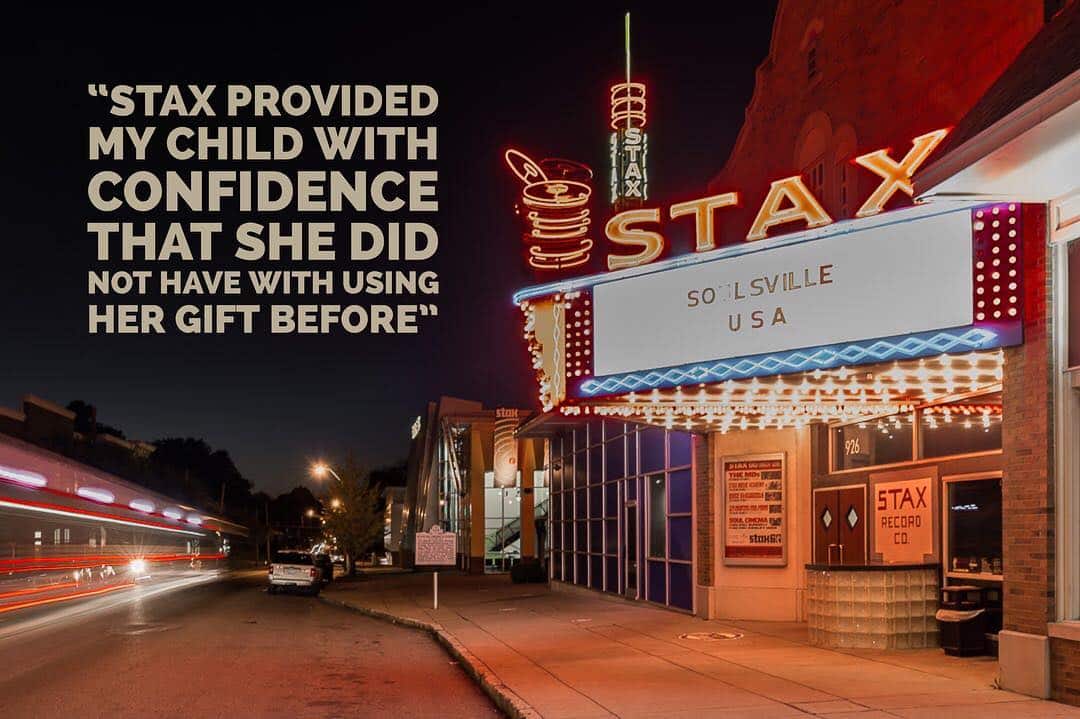 As we prepare to protect ourselves and our families during this time of uncertainty, let’s not forget about the importance of protecting our communities, as well––and that in doing so, we’re investing in the leaders of tomorrow.

Their doors may be closed, but their work continues—and you can contribute to their efforts! 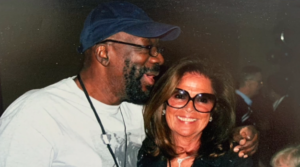 The Music Must Continue- A Stax Music Academy Fundraiser

The Soulsville Foundation’s Stax Music Academy (SMA) has launched its third annual #MusicMustContinue fundraising campaign.  But this year- there is a twist. SMA recently received 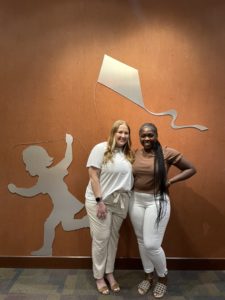 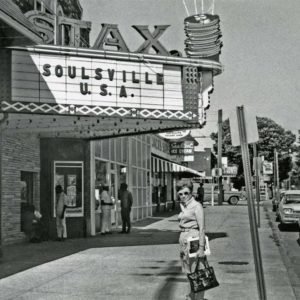 The fight for Civil Rights in America represented a long, demanding, and strenuous fight. Yet, the determination and drive of each individual that impacted the 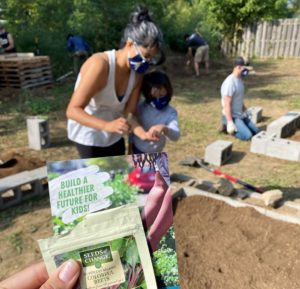 As Volunteer Odyssey’s Summer of Service continues, the heightened need that nonprofits are experiencing from the pandemic are being addressed by Memphians month-after-month! In July, 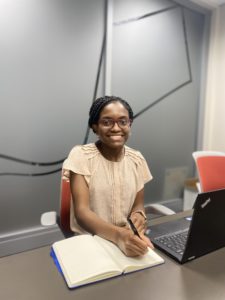 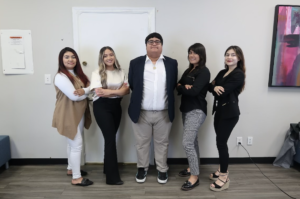 Growing and Flourishing as a NexGen Fellow