When It Comes to Memphis’ Electronic Music Scene, the Future is Everything

Ezra Wheeler, September 3, 2019
Home Blog When It Comes to Memphis’ Electronic Music Scene, the Future is Everything
ShareTweetSubscribe

Over the past century, Memphis has found itself at the epicenter of several musical genres, from rock ‘n’ roll and the blues to power pop and Southern hip-hop. Could electronic music be next? The team at Future-Everything, a self-described “for artist, by artist” electronic music label and lifestyle brand, is cautiously optimistic that it can.

Owned and operated by professional designers and musicians Micah McGee and Anthoney Carter, Future-Everything is the culmination of years of work by the duo to bring a thriving and diverse electronica scene to the Mid-South. “Memphis has a long history of breaking down musical barriers, and we’re trying to do the same,” explained Carter.

Although their friendship began nearly a decade ago, McGee and Carter did not initially bond over electronic music, but rather heavy metal. Like many of the people he now encounters, Carter claims that he was initially reluctant of the electronic scene that McGee was already deep into, perhaps due to the fact that he had not yet discovered the dizzyingly wide range of music that falls under the increasingly vague designation of electronica.

Their first musical collaboration together took the form of a group called GRIM, a “slow doom” group that married their individual love for electronica and metal and which illustrated to Carter that electronica music need not fall into the cliches of the genre that far too many still expect. Their first show was alongside local hip-hop stalwarts IMAKEMADBEATS and Cities Aviv, two other Memphis artists who have helped to push elements of electronic music into new and unexpected directions. Unfortunately, McGee relocated to Nashville soon after, and the duo’s mission to bring a vibrant electronica scene to the city was temporarily halted.

While in Nashville, McGee became a crucial figure in the city’s burgeoning electronica scene, hosting a weekly series of shows called Turn Down Tuesdays that helped give exposure to some of Music City’s most promising young talents. “Those shows provided the basis for everything we’re trying to do now,” he said.

When he returned to Memphis in 2014, McGee felt even more confident that he had the knowledge and experience to bring a viable electronic music scene to Memphis and he once again turned to his friend Anthoney Carter for help. Their first major foray back into music began as a series called DIM THE LIGHTS at Mollie Fontaine Lounge which aimed to “curb the public’s preconceived notions of electronica.” These shows also provided an ideal launching pad for their new brand Future-Everything, which they kept intriguingly abstract through their eye-grabbing yet intentionally obscure branding.

Although Carter and McGee continue to make music of their own (Carter as TEHKAL and McGee as Strooly), they have primarily focused their attentions to building Future-Everything into a label that boasts some of the finest young electronic music producers around the world, an ambitious goal to be sure, but one that already seems well underway. Today, Future-Everything has over forty artists on their roster hailing from both near (Chattanooga) and far (Lyon, France), as well as dozens of releases.

“We’ve spent hours searching through the depths of Soundcloud for relatively unknown artists who catch our attention with something unique in their sound, regardless of genre,” McGee explained. “A lot of the times they have the potential, but may lack the experience with engineering, marketing, and building a larger online profile.”

In many ways, Future-Everything aims to be a launching platform for these artists, assisting with nearly every aspect of the modern music business.

On Saturday, March 28th, Future-Everything will be hosting a showcase of some of their Memphis-based artists at Growler’s, which they hope will attract some audience members who may not consider themselves fans of electronica.

“We want to curate our brand and music, not our audience,” explained Carter. “The importance of diversity and inclusion cannot be overstated…it’s what fuels us,” added McGee. 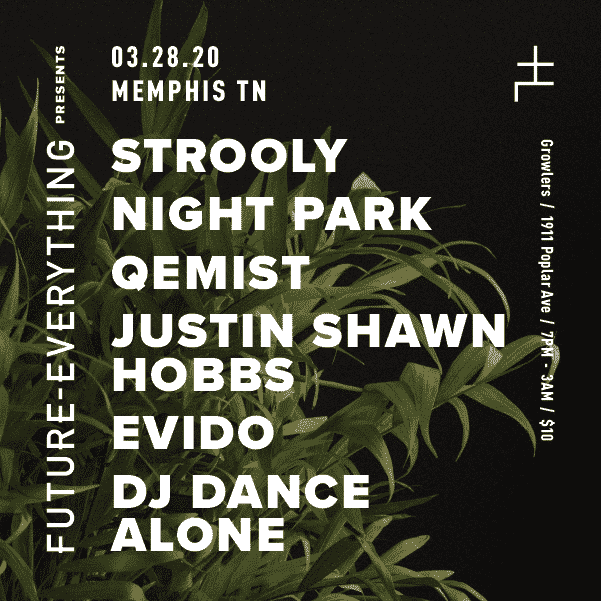 In addition to catching sets from both of Future-Everything’s founders, fans will also be able to enjoy performances from artists Qemist, DJ DanceAlone, and Night Park, as well as the wide selection of Future-Everything clothing and merch that will be available. “I don’t think Memphians are fully aware of the fact that we not only have some of the best young talent in our city right now, but legendary figures like Larry Heard and Mr. White call this city home as well. Part of our mission is to bring an already strong electronic music tradition in this city to the forefront.”

With an eye towards the future, it feels like anything (everything?) is possible for the label and Memphis’ electronic scene writ large.