2020 has been full of unexpected changes, and navigating those changes has meant challenge after challenge for almost everyone (literally on Planet Earth!). One Memphian decided to get some good advice on how best to tackle difficulty from some local pros. The best part? He made it a podcast so you can get insights on overcoming challenges too.

Sam Coates is the host of Memphis Voices podcast.

The new mini podcast series, hosted by Sam Coates, is called “Memphis Voices: Navigating The Unexpected.” While Sam is new to podcast creation, he’s studied the craft closely and listened to his fair share of podcasts.

The Memphis Voices series will include ten episodes (two of which have been released), and each one will feature an interview with a well-known Memphis leader. The local pros will share what they have learned about navigating challenge throughout their lives and especially during the era of COVID-19.  Listeners can expect to hear personal stories, experiences, and insights around family, professional life, careers, and more.

Sam let his fans know why he decided to launch his first podcast series in a statement on his Facebook page:

“Since we have all faced something we haven’t expected this year, I thought it would be a great time to interview ten well-known faces of Memphis and how they have learned how to navigate change not just now but throughout their life.” 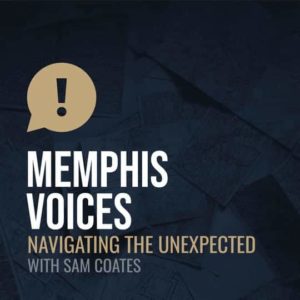 The first episode in the series features Carolyn Hardy, a University of Memphis graduate who purchased her first bottling company with hard money lending because she was turned down by traditional banks. Five years later, she sold the company for twice what she paid for it. Carolyn is now CEO of Chism Hardy Investments.

The second episode is a conversation with Cathy Pope, the CEO of Mid-South Food Bank, which serves 31 counties in Mississippi, Tennessee, and Arkansas. Cathy talks with Sam about her diverse career, the importance of family, work ethic, relationships, leadership, adversity, and much more.

Episode 3 is set to launch this week.

To listen in or to learn more, visit Memphis Voices here.

Or, look for “Memphis Voices: Navigating The Unexpected” on Spotify, Apple, or wherever you get your podcasts!