Hip-Hop Outsider Don Lifted Brings His Show to the Road

In the long and storied history of Memphis hip-hop, no one has quite done it like Lawrence Matthews, the multi-disciplinary artist and rapper better known as Don Lifted. In fact, at the very moment that the Bluff City’s signature hip-hop sound of low-fi beats, triplet flows, and violence-laden lyrics are becoming the sound du jour of the mainstream, Don Lifted has been methodically crafting a sound that flies in the face of this tradition. As he would explain, this fact has less to do with a conscious rejection of his hometown’s scene, but is rather a reflection of the alienation and sense of otherness he has often felt during his 28 years of life.

As one of the few black kids growing up in his suburban neighborhood, Don Lifted became keenly aware of the subtle racism and “othering” that is still all too prevalent in society. In response, he would spend much of his time alone, consuming whatever music happened to come across his TV or radio.

“MTV, VH1, video games, my dad’s music, which was everything from Tupac to Outkast to soul music…that’s why my musical tastes have always been hella diverse on accident,” he explains. While he became enamored with rock bands like Muse, Radiohead, and Tool and picked up skateboarding as a serious hobby, he was still largely rejected by his white peers. “It’s not like I was ingrained in the white skate culture, because even when I went to skate, I was still black. Like ‘what the hell are you doing out here?’”

By high school, white flight had already transformed Don Lifted’s neighborhood and he now faced the opposite problem of relating to his peers from outside neighborhoods like South Memphis and Whitehaven.

“I started listening to hip-hop as protection at first,” he says. “If I had gotten on the bus listening to Coldplay, they woulda snatched my headphones off my head.” However, what began as an act of self-preservation soon became a genuine love affair as artists like Kanye West, Kid Cudi, and N.E.R.D. came out of hip-hop’s left field with music that was sonically adventurous and refreshingly honest. “That shift moved the culture more in the direction of the way I was living and the things I was into. For the first time I thought ‘maybe I can rap for real.’”

“Carpetbagger from Memphis, They’ll never see me as bigger/I’m clapping, but I’m pretending, depression down to my tendons…”

After a stint at the University of Memphis, Don Lifted transferred to Maryland and began to focus on music as a potential career path. “At that point I was very rap focused. Just focusing so much of my attention on music in general.” Unfortunately, this period would prove to be one of the darkest chapters of his life, a span of time that is brilliantly documented on his 2016 album Alero. Recorded after his return to Memphis years later, the album is a brutally honest reflection of heartbreak, depression, substance abuse, and isolation that is strengthened by its minimalistic yet rich production. According to him, each song on the record speaks to a particular instance or moment in time, a theme that he would take even further on last year’s Contour.

Once again taking its title from the car he was driving at the time of the narrative, Contour could be seen as a prequel of sorts to Alero. “The story takes place from like ‘08 to fall of ‘09. I basically went back and tried to make the album I would have made at that age. So I revisited the stuff I was into and the ways I would have described my world.” This also meant revisiting the music that he associates with this time, which consisted of bands like Band of Horses and Bon Iver, as well as R&B artists like Frank Ocean. The result is a fascinating blending of genres that evokes the ending of youth he felt at the time.

“It’s really a collection of songs about isolated moments. A first kiss, a drive home, whatever. But there’s also a foreboding feeling that’s present, some unknown tragedy just around the corner.”

“I rather stand out/Rather speak for kids that been counted out/Got dreams but can’t live them out/Need a voice, well I’m here now…”

This month, Don Lifted will bring his unique brand of hip-hop to new audiences as he embarks on his “Sub-Urban Tour,” his first national tour around the U.S.

As those who have had the privilege of seeing Don Lifted perform live before know, his shows are intimate affairs bolstered by his custom visual arts displays, yet another artistic talent he has honed over the years. “For the tour, we’re going to be pretty intentional in how we display the visual information. We’ll have videos interwoven of those neighborhoods and streets and suburbs I was in at the time. I’m planning on each show being different from the last.”

For those of you in Memphis, Don Lifted will be returning for a show on October 6th as part of the River Series at Harbor Town, as well as a stop on the Sub-Urban Tour at The CMPLX on December 21st. He also teased an upcoming collaboration with producer IMAKEMADBEATS, which should have hip-hop heads around Memphis salivating. Until then, old fans and newcomers alike have plenty of Don Lifted music to tide them over and serve as a reminder that Memphis hip-hop continues to push the culture in new and unexpected directions, even if it has little in common with what came before. 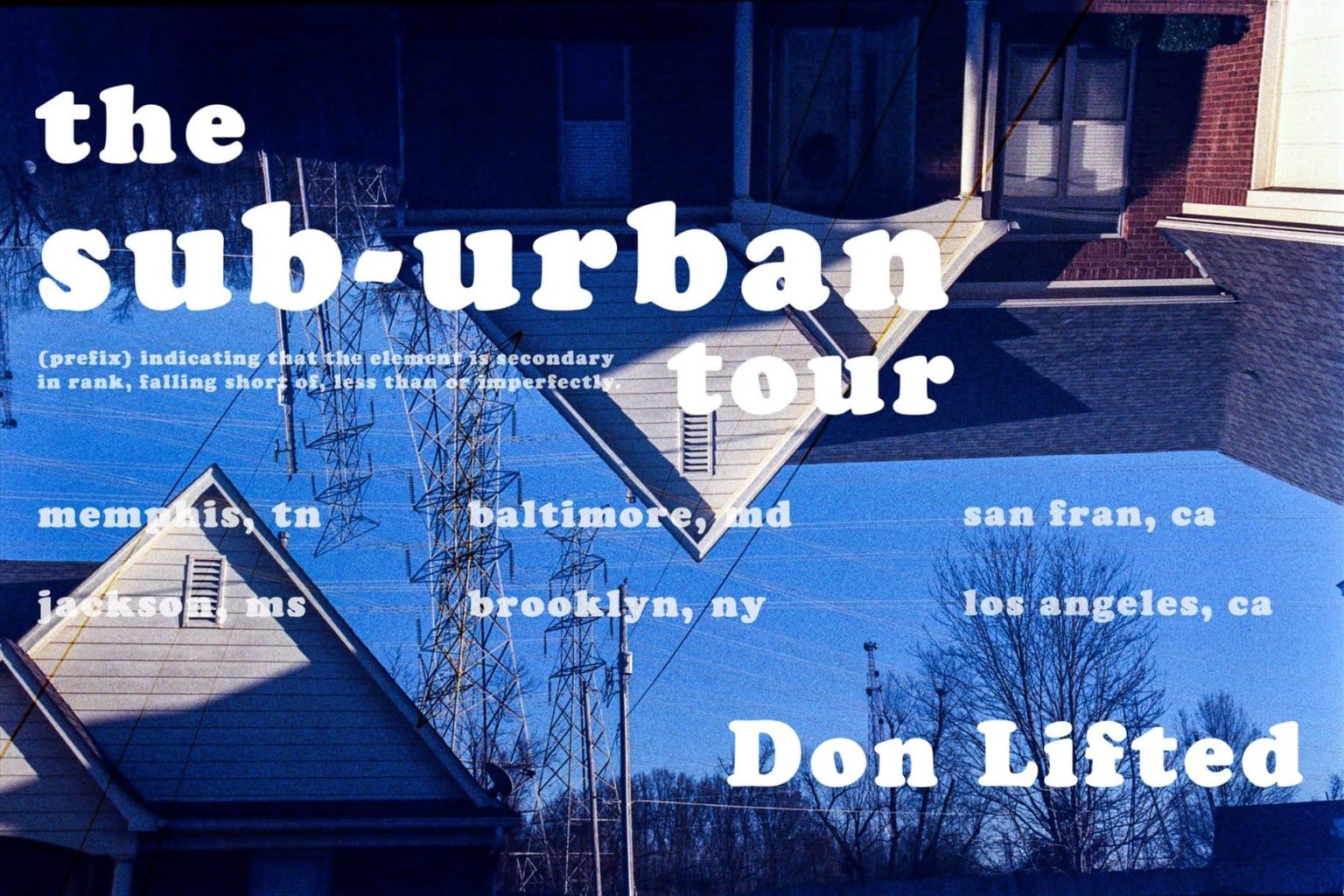 Don Lifted is kicking off the Sub-Urban Tours on Saturday, September 21st with a hometown performance at The Barton House. Physical copies of his new album, the visual album, and new Don Lifted merch will be available for purchase.