Fighting For Your Right to Be Cheesy: The Story of Andrew Arbogast and the Launch of Arbo’s Cheese Dip

Photo: Arbo's
April Pruett, November 10, 2021
Home Blog Fighting For Your Right to Be Cheesy: The Story of Andrew Arbogast and the Launch of Arbo’s Cheese Dip
ShareTweetSubscribe

Andrew Arbogast created Arbo’s Cheese Dip on Dec. 31, 2020, but the Arbo’s story really starts with his dad, Charlie Arbogast. Thanks to his love for experimenting with food, and his decadent decade-old recipe, Arbo’s officially launched in grocery stores on May 15th, 2021.

Since then, Arbo’s has sold over 17,000 containers in just 10 stores in Memphis alone—and thanks to that, the military veteran was able to quit his full time job at International Paper to capitalize on pop’s superpower in pursuit of the American dream that he served his country to preserve.

1. What do you love about Memphis?

Both growing up here, and now beginning a family business here.

My true appreciation for Memphis began when I was in high school – I have so many fond memories prior to that like seeing Memphis Chicks games, the Christmas parades downtown, the Mid-South Fair with family and friends; I guess I can say that I really began to appreciate the city when I was around 17 or 18. Maybe it was because I loved music, food and entertainment, but isn’t that ones destiny when growing up in Memphis. Going downtown to Beale Street for Memphis in May, hitting up the New Daisy or the original Raifords are some of my fondest memories.

We also found ourselves to be regulars at some of the ‘local’ joints like the Buccaneer, Yosemite Sam’s, and most notably, the Wind Jammer (RIP). Shout out to the late Blue Light Studio for making all of these memories possible. Most of them span across almost two decades—and the sad part is that I didn’t live here for many of them—so I had to make the most of it when I came home to visit.

High school in Arkansas, college in Missouri, and a 10-year Army commitment kept me longing for Memphis from 1999 to 2018.

Not only did my wife (Erin), our twins (Cam &Julia), and I want to move back home after I got out of the Army in 2018, but we left our beautiful island home in Savannah, GA to be back in Memphis with family and friends. I am almost certain that if it wasn’t for the community support and soulful atmosphere of Memphis, Arbo’s Cheese Dip would still be my father’s recipe only shared among close family and friends. A born and raised Memphian himself, none of this would have been possible without our  #CheeseFather, Charlie. It’s not just the recipe he mastered, but the love he showed all of us through his cooking. 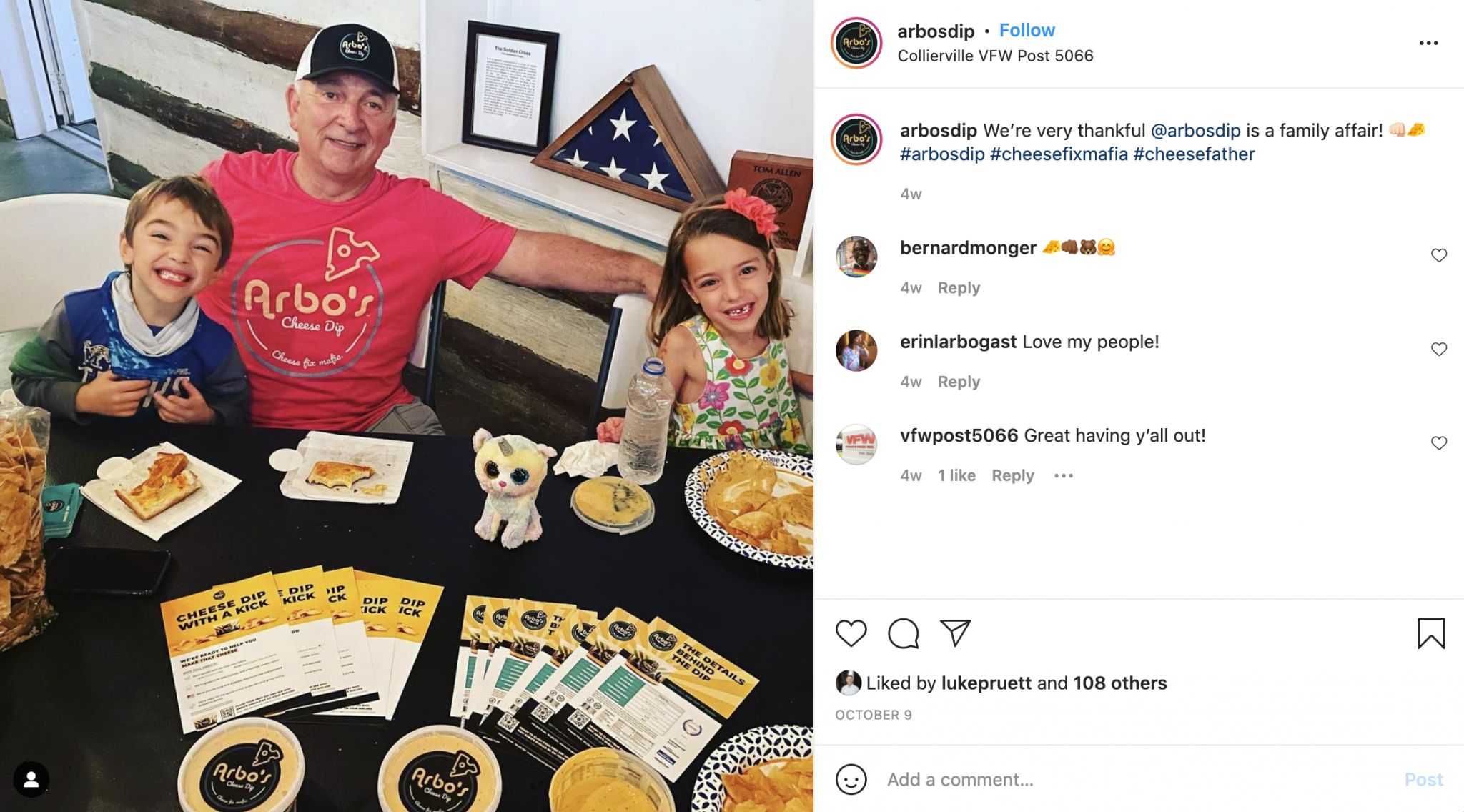 2. How has military service shaped your life? What was your job in the military?

I had several ‘jobs’ in the Army, from managing people, operations, logistics, recruiting and flying Apache Helicopters. As a commissioned Aviation Officer, I attended flight school to learn the fundamentals of flying helicopters, survival training, and basic warfighting skills. Upon graduation, I was immediately sent to a unit to assume a Platoon Leader role while going through more rigorous flight training in preparation for deployments to Iraq and Afghanistan.

[Through all of this, I learned] Success through failure. The military can be brutal – and I’m not only referring to war, but the responsibilities and expectations that come with the job. They have a lingering effect for a lifetime. It’s not a matter of ‘if’ those experiences will shape the outcome of your future, but it’s how you learn to manage and use them to your advantage—those incomparable life experiences and relationships. I miss the people and the life lessons obtained the most, and the bond between fellow soldiers in combat is surreal. One minute you’re antagonizing each other because you’ve spent nine months bunking together in a 8×22 ft container in the desert, and then a month later you’re the best man at their wedding trying to steal the first dance.

3. What makes Arbo’s stand out? What is the Arbo’s Story?

For those that haven’t tried Arbo’s yet, the first thing that’s typically stated is “HOW COULD THEY!? DON’T THEY KNOW THAT THIS IS THE HOME OF PANCHOS!?”

I totally get it—and I’m not here to change anybody’s hearts and minds. All I’m saying is there is room for more, and although they look similar, there are unique differences with both.

Once you crack the lid open, the first thing you’ll notice is the smoothness and visible spices that will get your mouth watering. Because it’s a refrigerated cheese dip, you can dig in while it’s still cold. Take notice that your chip will be perfectly coated with cheese and still remain intact! The boldness of the seasonings and the cheese combined are unlike any other cheese dips, and there’s even a little kick at the end that keeps everyone going back for more.

Wanna see what Arbo’s is all about?