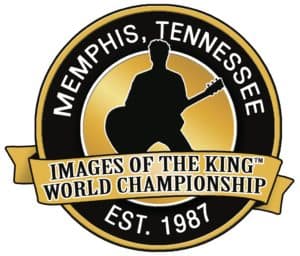 It’s been 35 years since Doc Franklin first held the “Images of Elvis” event at Bad Bob’s Vapor’s Supper Club in Memphis, and we’re excited to announce that the event is returning to its roots this August. We’ll be hosting all of our events at Hernando’s Hideaway, a world-famous music venue with a deep history of its own. Johnny Cash, Jerry Lee Lewis, and Elvis himself have all performed here, and we’re proud to continue that tradition. We hope you’ll join us for a week of celebrating the King of Rock ‘n Roll.

Images of the King will be held from August 11th through August 16th, 2022, during EPE’s Elvis Week 2022. This year’s events will include four rounds of the Images of the King World Championship ETA Contest, our brand new “Big – Little King” Contest and some of Memphis’ most memorable events, including the annual Elvis Week ETA Roast.

Dan Barella, the host with the most and award-winning ETA, will be the late-night host. He will be joined by award-winning ETAs Nick Perkins, Joseph Hall, Travis Powell, Austin Irby, Jonathan Rader and Emilio Santoro. Also joining this lively group are special guests Samantha Chambliss, The Spin-Outs Band, and an Elvis Week Roast of Alex Mitchell.

Fans of the King won’t want to miss a minute of the action at this year’s Images of the King Contest. To make sure you don’t miss a beat, be sure to pick up your tickets in advance. The box office will open one half-hour before each show, and doors will open at the same time. We’re also offering a pass for all four contest rounds for just $225. But hurry – these tickets are sure to go fast! So don’t wait. Get your tickets today and come celebrate the legacy of Elvis Presley.

Staff and performers will stay at the Clarion Hotel & Suites Conference Center Memphis Airport (formerly the Holiday Inn Memphis Airport Hotel) during Elvis Week. The hotel has recently changed ownership, and all the guest rooms have been fully renovated. The hotel features a bar and a restaurant and offers free shuttles to and from the airport. We are very pleased with the newly renovated Clarion Hotel Memphis Airport and its competitive room rate of $119 per night for our attendees and competitors. For more information on lodgings, visit https://tributefestival.rocks/images-memphis/images-host-hotels/