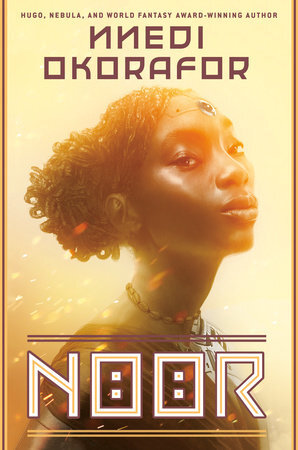 [Memphis, TN, May 2022] – Memphis Reads, the Memphis community common reading program based at Christian Brothers University, is pleased to announce its book selection for 2022: “Noor” by Dr. Nnedi Okorafor.

“Noor” takes place within an African-futuristic setting where our main character must defy the odds to survive.  “AO has never really felt…natural, and that’s putting it lightly. Her parents spent most of the days before she was born praying for her peaceful passing because even in-utero she was “wrong”. But she lived. Then came the car accident years later that disabled her even further. Yet instead of viewing her strange body the way the world views it, AO embraces all that she is: A woman with a ton of major and necessary body augmentations. And then one day she goes to her local market and everything goes wrong.” Already deemed unnatural, she is now being hunted; all in an era where the entire world can watch from a screen. Yet, however bleak it may seem, her will to survive coupled with an action-packed journey will keep you on the edge of your seat, as our protagonist ventures on “a relentless journey of tribe, destiny, body, and a wonderland of technology.” It is safe to say, “expect the unexpected” (https://www.penguinrandomhouse.com/).

Memphis Reads was created to give students a common academic experience and to connect them with the campus community, as well as the larger Memphis community. Having students and faculty members read the same book provides them with numerous opportunities to discuss it throughout the school year — and by spreading the program city-wide, it provides the same opportunity for our colleagues at other schools and for the general community.

Author Dr. Nnedi Okorafor will be in Memphis at several Memphis Reads events, including speaking engagements at Christian Brothers University on October 26th, Rhodes College on October 27th, and visit a Memphis- Shelby County School as well. The times and locations for these events will be released closer to the event dates. Memphis Reads partners will host parallel events, giving multiple points of access to the topics addressed in Noor. All events will be free and open to the public.

Noor is published by DAW Books (https://www.penguin.com/daw-overview/) and is available at local booksellers and online. Dr. Nnedi Okorafor is a Nigerian American author holding a PhD in literature and winner of the Hugo, Nebula, World Fantasy, Locus and Lodestar Awards. Her work includes her comic writings for Marvel (particularly with the superhero, Black Panther), and the upcoming HBO TV Series based on her award-winning novel, “Who Fears Death.”