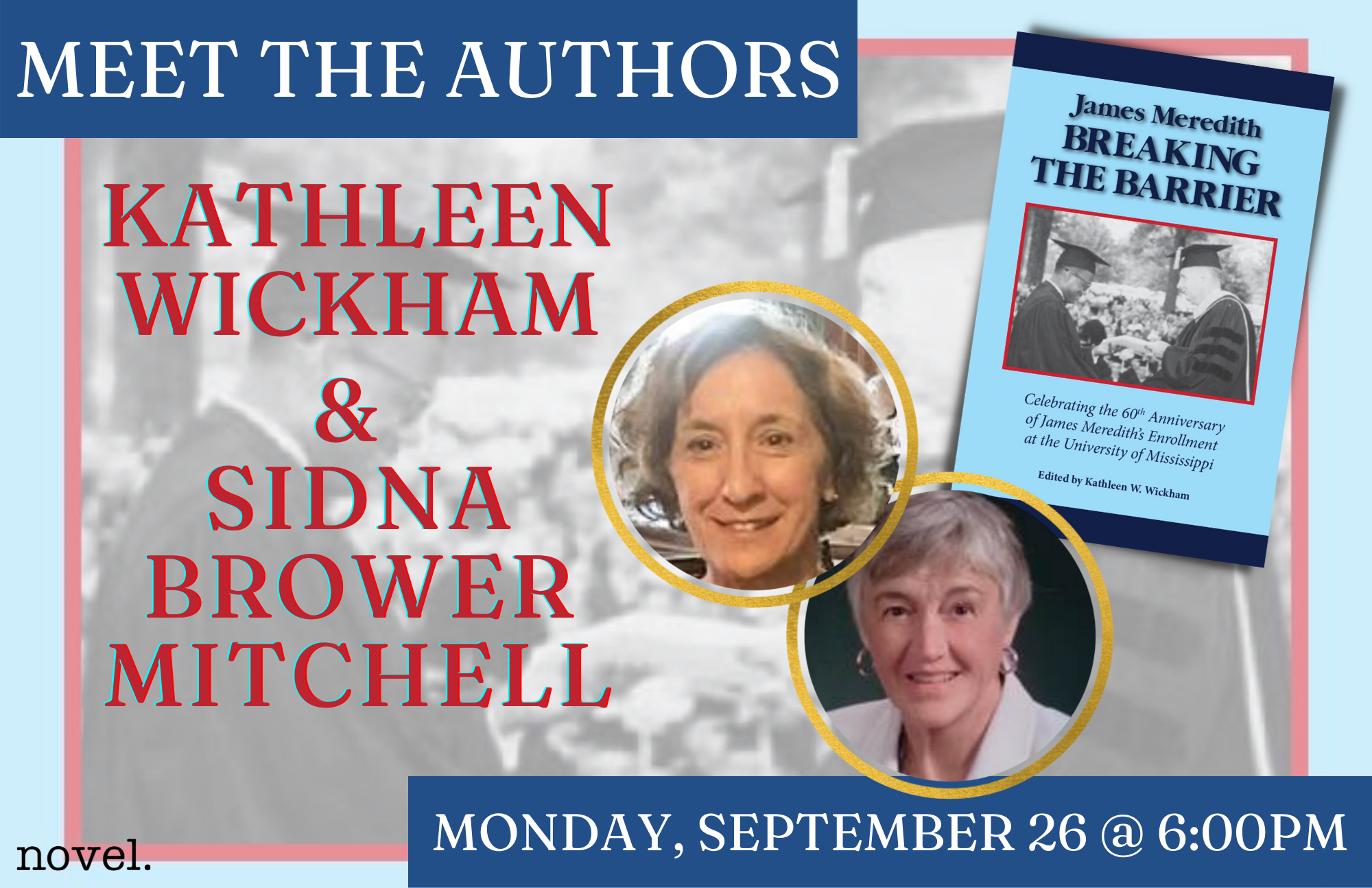 Join us as we welcome KATHLEEN WICKHAM and SIDNA BROWER MITCHELL on Monday, September 26 at 6:00 pm to celebrate the release of  JAMES MEREDITH: BREAKING THE BARRIER.

**Can’t attend an event?  Don’t miss out on signed copies!  You can order autographed books for this event by going here https://www.novelmemphis.com/event/kathleen-wickham-and-sidna-brower-mitchell-james-meredith-breaking-barrier and leaving your personalization instructions in the comments at checkout! Your books will be signed and ready for pickup or shipping the day after the event.**

An illustrated collection of essays commemorating the 60th anniversary of James Meredith’s historic 1962 enrollment at the University of Mississippi. Providing a unique combination of viewpoints, ten former University students, journalists, historians and eye-witnesses tell the story of James Meredith’s turbulent but successful path to become the state’s first African American to graduate from the University of Mississippi.

Dr. Kathleen Woodruff Wickham is a Professor in the School of Journalism & New Media, University of Mississippi. She is the author of We Believed We Were Immortal: Twelve Reporters Who Covered the 1962 Integration Crisis at Ole Miss. In 2009 she applied for a grant to install a plaque and memorial bench honoring Agence France-Press reporter Paul Guihard, killed on campus Sept. 30, 1962, during the Meredith integration riots. In 2010 she presented a Society of Professional Journalists program Without Fear and With Courage: Honoring the Reporters who covered the Ole Miss Integration Crisis designating the Ole Miss campus as a national historical journalism site. For fifteen years she has served as a judge for the National Headliners Journalism Awards.

As editor of the University of Mississippi student newspaper, The Daily Mississippian, Memphis native Sidna Brower Mitchell turned out a special edition during the violent 1962 campus demonstrations and wrote an editorial which was nominated for a Pulitzer Prize. After graduating from Ole Miss, Mitchell had a Scripps-Howard Internship, working as a general reporter on the World Telegram and Sun in New York City and then as a deskman for UPI in London.  Later, she was director of employee communications for Citibank where she met her husband.  Moving to New Jersey, the Mitchells purchased a weekly newspaper for which Sidna wrote a weekly cooking column for 42 years.  Ultimately she joined the NJ Council on Affordable Housing (COAH), retiring as deputy director in 2002.