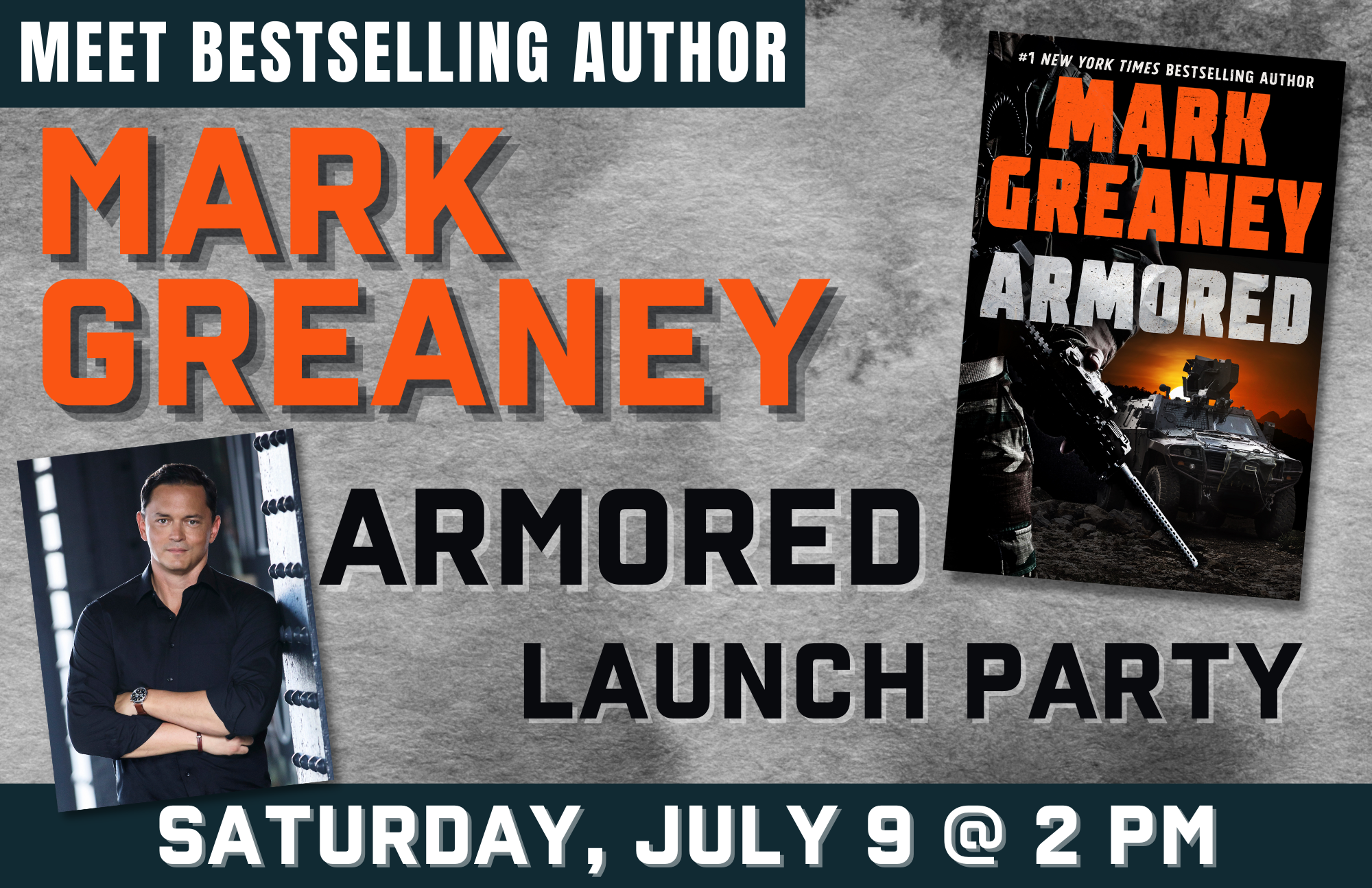 Please join us as we welcome New York Times bestselling author MARK GREANEY on SATURDAY, JULY 9 at 2:00 PM to celebrate the launch of ARMORED.

**Line tickets are required to meet the author and are free with the purchase of ARMORED from Novel, on sale July 5. Line tickets will have a Group Letter on them. After the author has finished speaking, we will line up Groups A and B. If you have a line ticket with Group C or later, feel free to browse the store while you wait for your letter to be called.**

Joshua Duffy is a Close Protection Agent—a professional bodyguard—and he’s one of the world’s elite operatives. That is, he was until his last mission in Lebanon. Against all odds, Josh got his primary out alive, but the cost was high. Josh lost his lower left leg.

There’s not much call for an elite bodyguard with such an injury. So, Josh has to support his family working as a mall cop in New Jersey. For a man like Josh, this is purgatory on earth, but miracles can occur even in Paramus.

A lucky run-in with an old comrade promises to get Josh back in the field for one last job. The UN is sending a peace mission into the Sierra Madre mountains in Mexico, an area so dangerous it’s known as Espinazo del Diablo—the Devil’s Spine. Only a fool would think they could broker peace between the homicidal drug cartels in the region, and only a madman would sign on to keep those fools alive.

#1 NYT bestselling author Mark Greaney’s debut international thriller, THE GRAY MAN, was published in 2009 and became a national bestseller and a highly sought-after Hollywood property. Ten subsequent Gray Man novels have been released to date, including his latest, SIERRA SIX. Mark is also the #1 New York Times bestselling author or coauthor of seven Tom Clancy novels, including his most recent TOM CLANCY TRUE FAITH AND ALLEGIANCE. He collaborated with Tom Clancy on three Jack Ryan novels before Tom’s death in 2013. RED METAL, a military thriller written by Mark Greaney and Lt Col Hunter R. Rawlings, USMC, became a New York Times bestseller in 2009. Mark’s books are published in several languages and are also available as audiobooks. A feature film adaptation of THE GRAY MAN is in production at Netflix, with Ryan Gosling in the title role. A feature film adaptation of Mark’s scripted audio play Armored, is in development with Michael Bay and Erwin Stoff to produce. In his research for the Gray Man and Jack Ryan novels he has traveled to dozens of countries, visited the Pentagon, military bases, and many Washington, D.C. Intelligence agencies, and trained alongside military and law enforcement in the use of firearms, battlefield medicine, and close-range combative tactics. Mark lives in Memphis, Tennessee with his wife, his three stepchildren, and his three dogs, Lobo, Ziggy, and Winston.