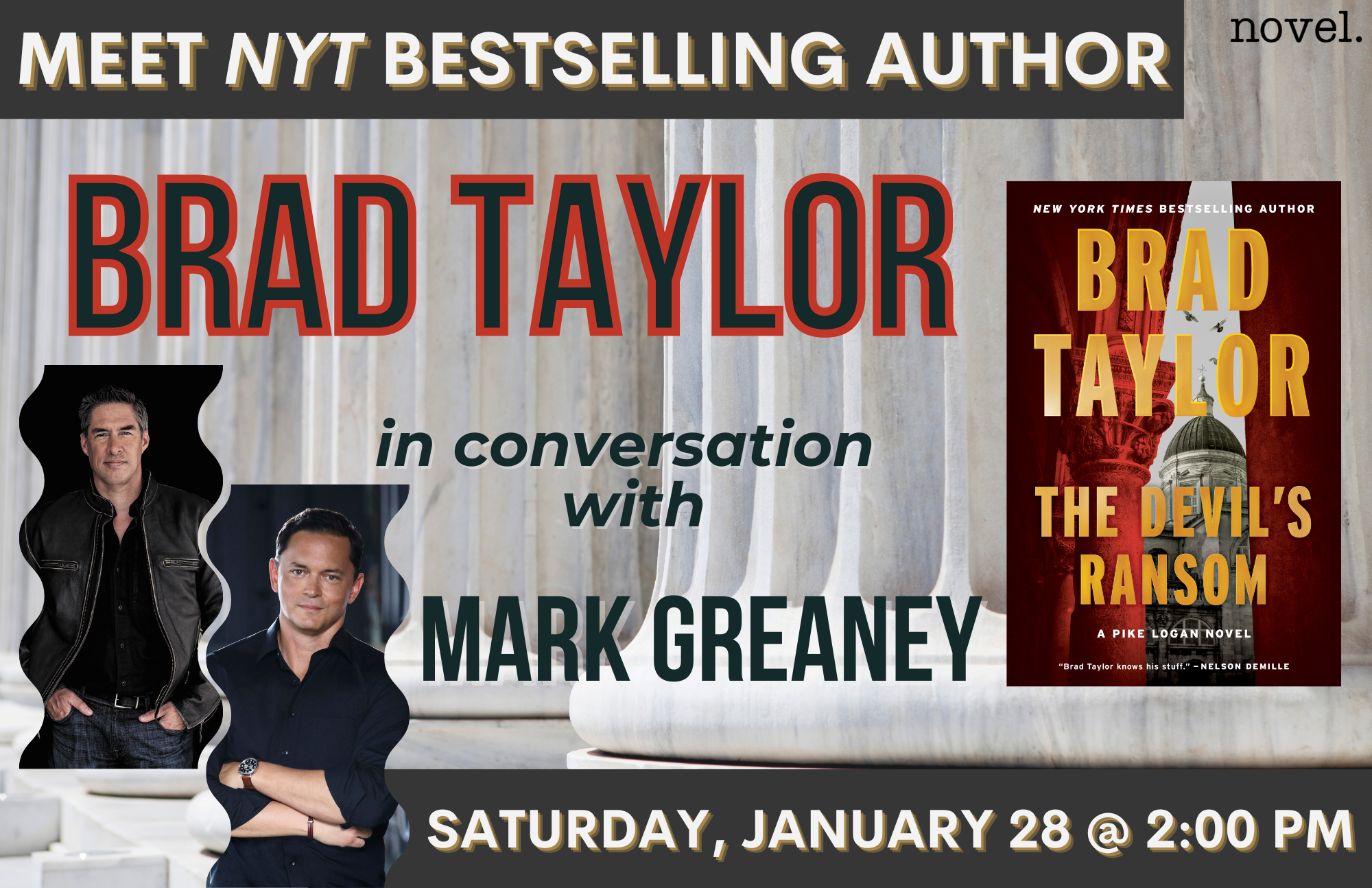 on SATURDAY, JANUARY 28 at 2:00 PM to celebrate the launch of Brad Taylor’s new novel THE DEVIL’S RANSOM.

Conducting a routine cover development trip to Tajikistan, Pike and Jennifer learn that Afghanistan has fallen, and there’s a man on the run. One that has done more for the United States in Afghanistan than anyone else. Pulled in to extract him, Pike collides headlong into a broader mystery: His covert company, along with every other entity in the Taskforce, has been hit with a ransomware attack, and there’s some connection between the Taliban and the hack. Given the order to track down the perpetrators, he has no idea that the problem set is much, much larger and more dangerous than a simple attack on his organization. That hack was just a test-run, and the real one is coming soon, engendered by a former NSA specialist in the U.S. government.

A man who wants to return to the bipolar world of the Cold War, the turncoat has cloaked his attack behind hackers from Serbia and Russia, and if successful, his target will alter the balance of power on the global stage. So far, the specialist has remained one step ahead of the Taskforce, but he has just made one massive mistake: hitting Pike Logan.

Brad Taylor, Lieutenant Colonel (Ret.), is a twenty-one-year veteran of the U.S. Army Infantry and Special Forces, includ­ing eight years with Delta Force. Taylor retired in 2010 after serving more than two decades and participating in Oper­ation Enduring Freedom and Operation Iraqi Freedom. He has written fifteen New York Times bestsellers and is a security consultant on asymmetric threats for various agencies. He lives in Charleston, South Carolina, with his wife and two daughters.

ABOUT THE CONVERSATION PARTNER:

Mark Greaney’s research for the Gray Man novels, including Sierra Six, Relentless, One Minute Out, Mission Critical, Agent in Place, Gunmetal Gray, Back Blast, Dead Eye, Ballistic, On Target, and The Gray Man, has taken him to more than thirty-five countries, and he has trained alongside military and law enforcement in the use of firearms, battlefield medicine, and close-range combative tactics. With Marine LtCol Rip Rawlings, he wrote the New York Times bestseller Red Metal. He is also the author of the New York Times bestsellers Tom Clancy Support and Defend, Tom Clancy Full Force and Effect, Tom Clancy Commander in Chief, and Tom Clancy True Faith and Allegiance. With Tom Clancy, he coauthored Locked On, Threat Vector, and Command Authority.