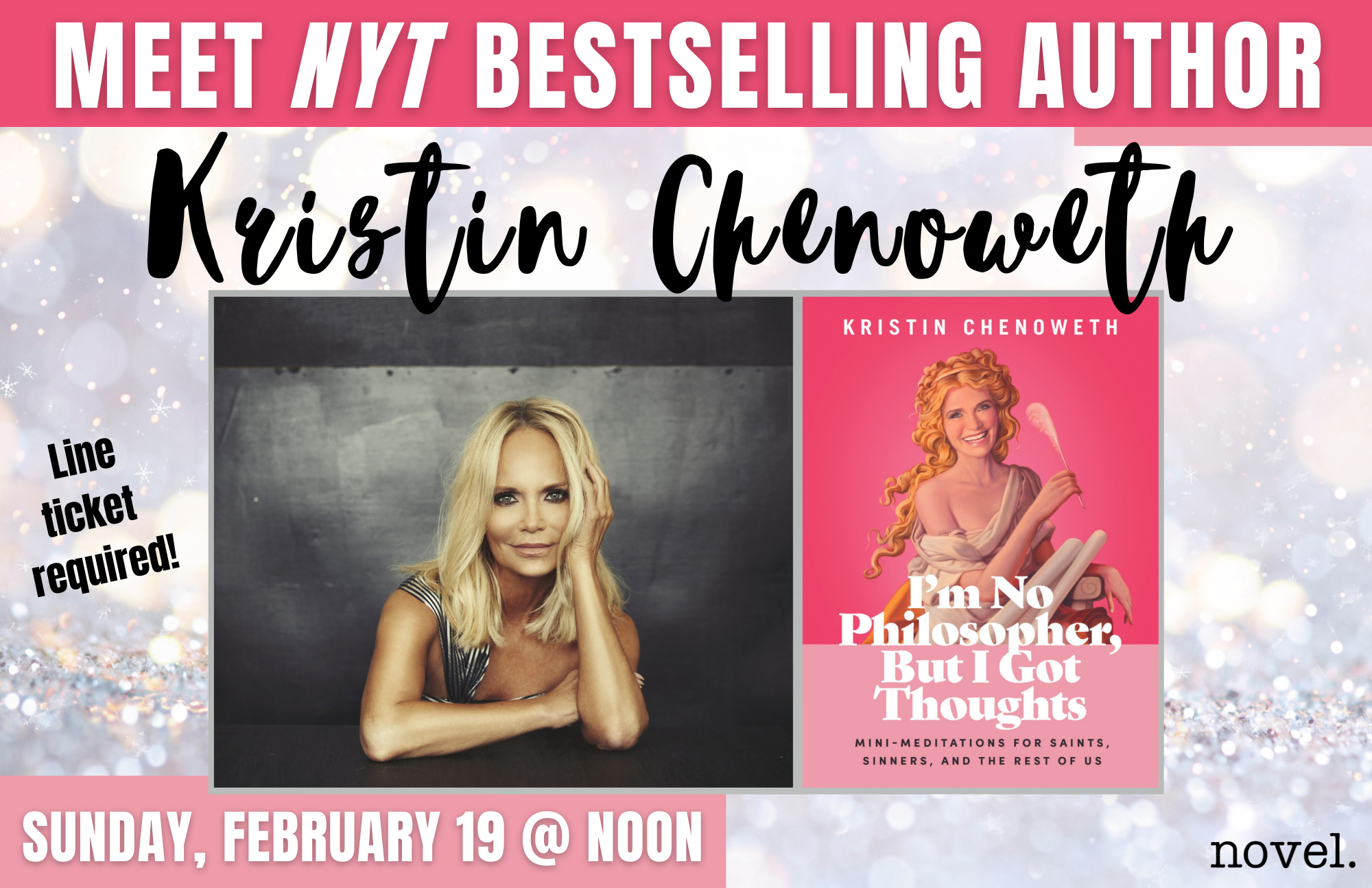 KRISTIN CHENOWETH: I’M NO PHILOSOPHER, BUT I GOT THOUGHTS

Novel is thrilled to welcome Emmy® and Tony® Award-winning actress, singer, and New York Times bestselling author KRISTIN CHENOWETH on Sunday, February 19 at 12:00 PM to celebrate her new book, I’M NO PHILOSOPHER, BUT I GOT THOUGHTS.

This is a signing line only, no presentation.

Line tickets are required to meet the author and are free with the purchase of Kristin’s new book, I’M NO PHILOSOPHER, BUT I GOT THOUGHTS, from Novel, on sale JANUARY 17, 2023.  Books can be purchased here.

Line tickets will have a group letter on them.  At 12:00 PM, we will line up Groups A and B.  If you have a line ticket with Group C or later, feel free to browse the store while you wait for your letter to be called.

**There will be NO posed photos with Kristin.  Photos taken from the signing line will be allowed.**

**Masks are strongly recommended if you are not vaccinated.**

Aristotle. Socrates. Descartes. And now, Chenoweth. (How about some women, am I right?)

From television actress, Broadway star, and New York Times bestselling author Kristin Chenoweth comes I’m No Philosopher, But I Got Thoughts, an inspiring high-design, colorful book featuring philosophical-ish musings on connection, creativity, loss, love, faith, and closure. Just like Kristin’s grandmother inspired her to trust her heart and develop her own belief system, you’ll be inspired to develop your own life philosophies, as you journey through some of Kristin’s most vulnerable and humorous personal stories, in her constant pursuit to make the most out of life.

In each chapter, you’ll find:

I’m No Philosopher, But I Got Thoughts is the perfect book to pick up on days when you need an extra shot of encouragement, a little laughter, and a gentle reminder that kindness can take you a long way. This is a great gift to give for birthdays, holidays, graduations, Mother’s Day, or for fans of Kristin Chenoweth, known for her Emmy® Award-winning role in the ABC hit series Pushing Daisies and Broadway’s Wicked.

Emmy® and Tony® Award-winning actress, singer, and New York Times bestselling author Kristin Chenoweth’s career spans film, television, voiceover, and stage. She received an Emmy® Award for her role in Pushing Daisies, won a Tony® Award for You’re a Good Man, Charlie Brown, and received a Tony® Award nomination for her original role of Glinda the Good Witch in Wicked. Kristin has released multiple albums, including The Art of Elegance and For the Girls, and has performed to sold-out audiences across the world. Notable TV and film credits include Schmigadoon!, West Wing, Descendants, and her Emmy®-award nominated role on Glee; and Holidate, Deck the Halls, RV, and Four Christmases. She is the author of the bestselling books What Will I Do with My Love Today? and A Little Bit Wicked. In partnership with the Broken Arrow Performing Arts Center (BAPAC) Foundation, she launched her annual Broadway Bootcamp for young Broadway hopefuls. Kristin is a graduate of Oklahoma City University with a Master’s degree in Opera Performance. She is an inductee into the Oklahoma Hall of Fame, the Oklahoma Music Hall of Fame, and in 2015 she received a coveted star on The Hollywood Walk of Fame.